Archive for the 'Ski' Category

The next morning my host and I headed one hour from Los Condes to the top of El Colorado. October 12 was supposed to the the last day of a long season -El Niño has dropped many meters over the winter – but even more heavy snow later that week kept the mountain open to November 1 – the equivalent of May 1 in the Northern Hemisphere.

Afterwards we headed back down to Santiago so that I could catch my evening flight to Buenos Aires. The snow is only at the highest elevations. 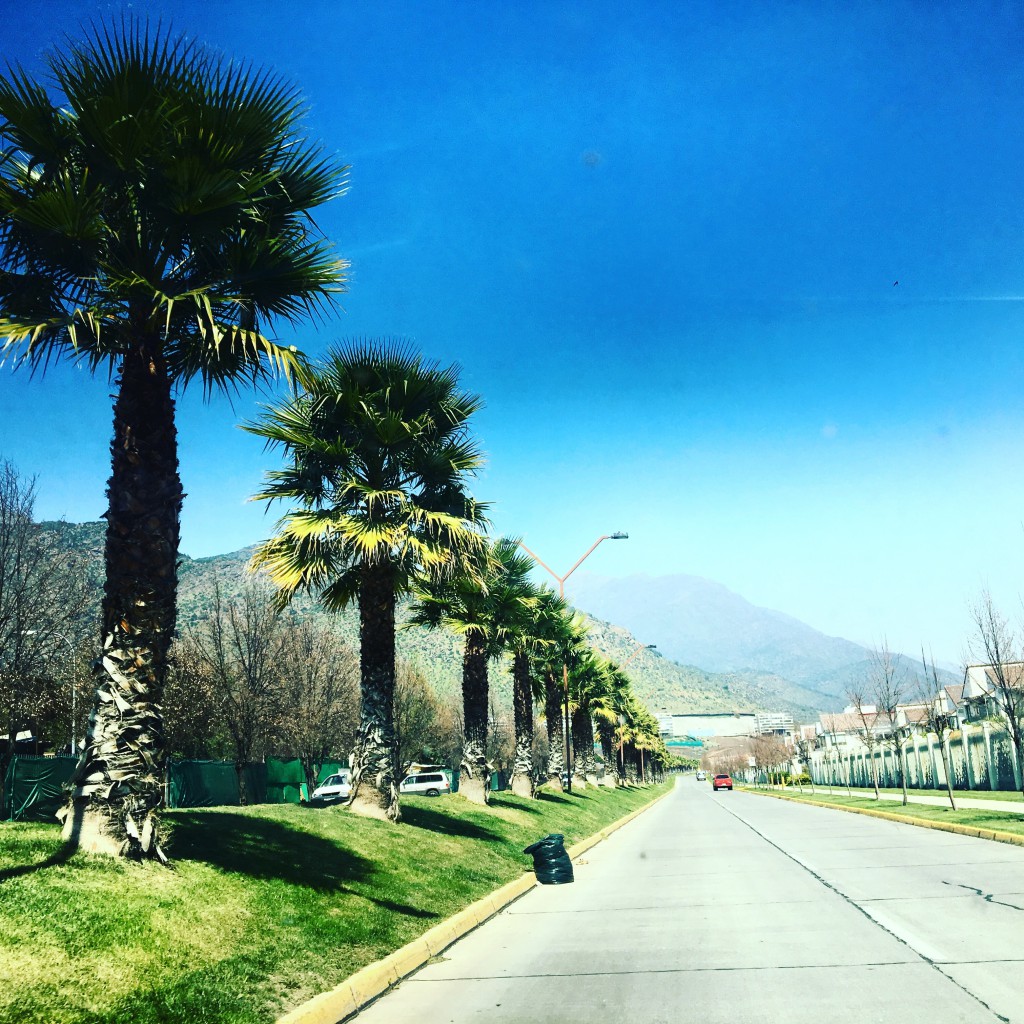 THe temperature was nearly 70 degrees ( 21 C ) just one hour below in the Valley. For TotalAdventure packages in Chile – CLICK HERE !

Highest Mountain in the Western Hemisphere

ArcticTropic flies by Cerro Aconcagua, 22841 ft , 6962m, the highest mountain in the Western HemisphereLast Friday,February 3, ArcticTropic was returning to Chile after business meetings in Argentina. The Mendoza to Santiago flight was on a midsummer’s day. One can see the Argentina – Chile border post on the highway below, then Portillo Ski area in Chile, beside the bright blue Lago de Las Incas. 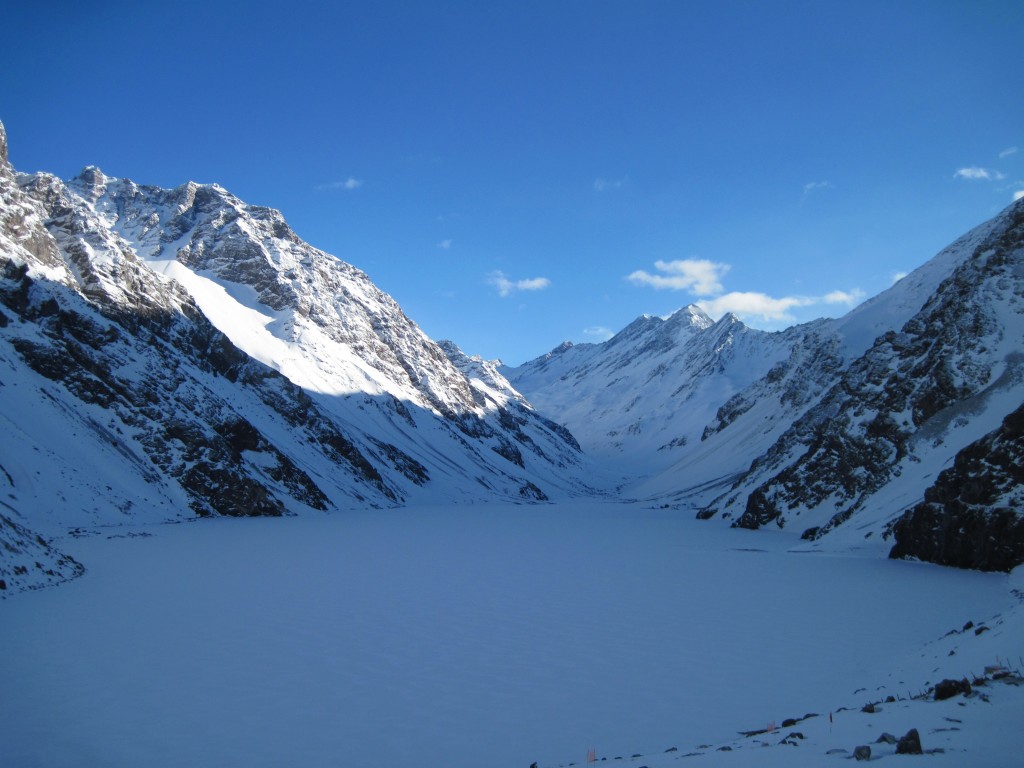 Valarie D’Elia  – the Travel Reporter  for NY 1 – New York City’s 24/7 All News Station is airing a summer travel feature – “ Warm Up To Cool Ideas For Extreme Temperature Travel ” Along with great clips from Havana, Iceland and New York State is footage shot by ArcticTropic while skiing at Portillo,Chile last August. Portillo is the premier ski resort in the Southern Hemisphere – now enjoying 27 inches of fresh powder that fell over the weekend. Be sure also to check out Valarie’s site – Travel With Val – for the best travel deals all over the world.

Juncalillo Run – 10 AM.
Va I Venti lifts are unique to Portillo and get expert skiers up the mountain in minutes.
Skiing down El Plateau.
Lunch at Tio’s Bob’s !
ArcticTropic was part of a press group and we had the opportunity to sit down with the owner, Henry Purcell at teatime one day. The Purcell family, originally from the United States, has owned the hotel and resort for over 50 years. A very interesting history can be read HERE.
Après – ski is relaxing and very social. First, a bone –warming soak in the outdoor pools and hot tubs heated to 38 C.
Dinner, like all meals, is included in the one-week package, along with accommodation and lift tickets. There is no need to carry cash. One simply gives their room number if asked, or signs for extras, such as drinks.
Many of the staff have worked at Portillo for 20 to 30 years and greet their guests by name when they return each season.
After dinner a lively crowd gathers at the bar, with different bands every night. For the late night crowd, there is a disco that opens at Midnight. Roaring fireplaces keep all the public rooms warm.
At night the hotel almost has the feeling of a ship, -far away from civilization under the bright cold Andean sky full of the Southern Stars.
ArcticTropic will have regular updates from Portillo during the off-season and lots of news before next season’s opening in June ,2011. Updates are always available on the Portillo Website.
Sep 4th

On the last run of the day, one of ArcticTropic‘s skilled videographers shot this excellent downhill footage while skiing.

The Chilean Flag waves proudly over the Andes.

Yesterday was frigid and snowy. Here, racers practice for an upcoming race. Today is bright and sunny. ArcticTropic will have some great shots by evening in this time zone. 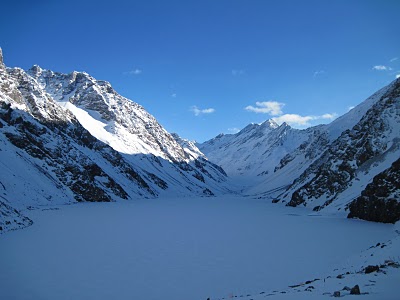 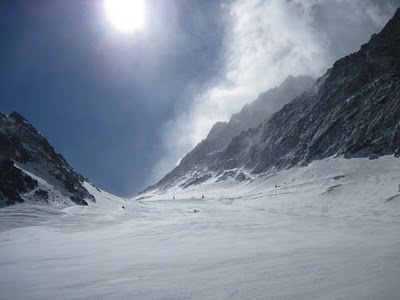 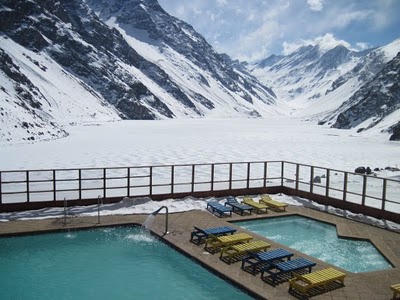 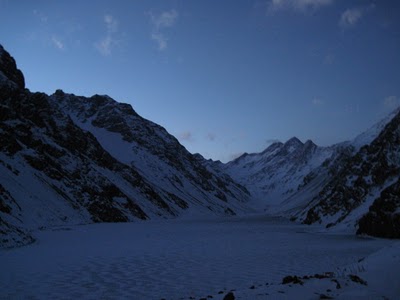 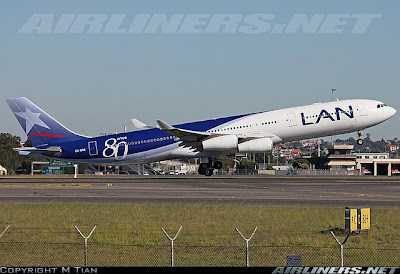