After being told that the temperature atop Perito Moreno was -4 degrees Fahrenheit, I wore as much clothes as I can comfortably walk in. Waking up at the wee hours of the morning was extremely easy when I knew I’d be hiking across one of the world’s most famous glaciers.

An hour and half bus ride and a half hour boat ride across Argentino Lake all led up to a mountain hike through a forest. We arrived at a cabin where we left our lunch-filled backpacks and I was loaned a pair of hiking boots. I wore water proof, leather boots in the hopes of keeping my toes nice and warm, but was told they wouldn’t work well with the crampons I was about to wear.

We hiked again to a rocky shore where we received a quick geography lesson: First of all, Perito Moreno gets its name from Francisco Moreno, an Argentine explorer who helped defend the territory during the Argentine/Chile border disputes. “Perito” means “expert.”

All this fallen snow creates a tremendous amount of weight on the glacier and gravity pushes it down the mountain at a rate of about six feet a day.

Perito Moreno was created by 400 years of this process: snow falls at the top of the mountain, it compresses and becomes ice and slides the entire mass father down the mountain towards the Peninsula de Magallanes.

The conditions of where the glacier is created must be absolutely perfect to keep it in constant motion. Whether the glacier moves forward or stays put all depends on the amount of mass it loses.

Perito Moreno’s latest trend has been to reach the Peninsula de Magallanes about every four years and create a damn in Argentino Lake. The south side of the lake then begins to rise, creating more friction against the glacier, the water will eventually erode the ice and create a magnificent tunnel. Once this tunnel is created and water starts rushing through, it’ll take about four to six days for the damn to fully collapse and once again, there will be a gap between the peninsula and Perito Moreno. 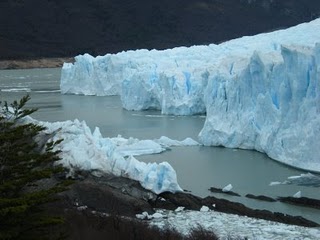 This picture shows the remnants of where the damn was when it collapsed just last year.

Now, back to the adventure.

After the lesson we hiked up a steep and rocky hill to come face-to-face with the base of the glacier. 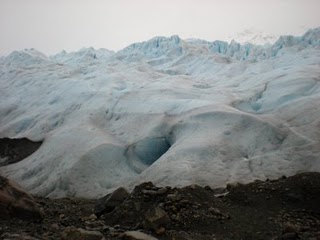 We geared up with our crampons and were taught to walk with our feet shoulder width apart and taking little baby steps. It was a funny-looking walk, but it ensured our safety.

We walked in a straight line, trying to step in the exact same places where the previous persons’ crampons already broke apart the hard ice.

There are craters all over the surface of the glacier that were created by melting water. Standing on top of the giant sheet of ice, all you hear is the wind and the water running through those craters. It’s a constant waterfall sound as the glacier has thousands of inner waterfalls and rivers.

We reached a stream of water where I couldn’t resist and had a drink from the massive water fountain. I took my glove off and reached into the icy water, cupping probably the purest water I’ve ever tasted.

As it turns out, glacier water has no minerals and although it serves for hydration, it doesn’t provide our bodies with the nutrients it needs.

Our hike lasted an hour and as we turned a corner upon our descent, we spotted a table. 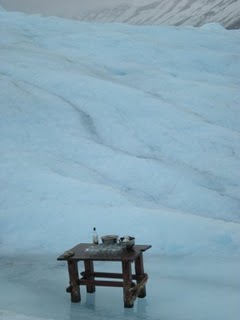 A couple of alfajores, a bowl filled with glacier ice, a few glasses and a bottle of whiskey awaited us. I’m not a whiskey drinker so I grabbed my glass with glacier ice and stuck it under a nearby waterfall. With my pristine glass of water and several others with whiskey, we cheered to a magical and unforgettable adventure.

We climbed off the glacier and took our crampons off. Then hiked back to the cabin to sit beside a fire and have lunch. Our hike then continued as we walked back to boat, then onto the bus and drove to the Peninsula de Magallanes to walk along the coast facing the glacier and view it from all angles.

I passed out on the bus ride back to El Calafate. Could you blame me? It was an eight-hour hike through all sorts of terrain, including the famous and majestic Perito Moreno! 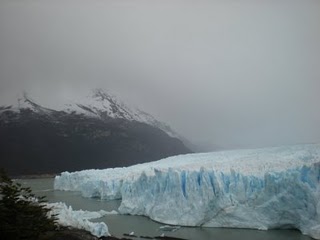 Yesterday, at 6:30 a.m., three hours prior to the sunrise, and in 20 degree weather, we boarded a catamaran and sailed across Argentino Lake to visit a few glaciers, including the famous Perito Moreno.

We headed northwest towards Upsala Glacier, but didn’t get to see the actual glacier; its loss of ice created a barrier of icebergs that spanned the width of the north arm of the lake. These icebergs, ranging in size from that of a soccer ball to bigger than our 150-foot vessel, were pieces of the glacier that broke off. 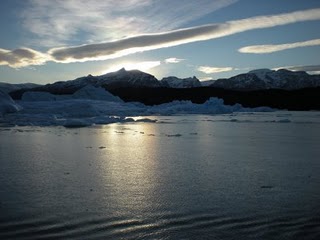 Upsala Glacier is one of 47 glaciers that decend from the Andes mountain range in South America; it’s also the biggest.

These 47 glaciers make up Los Glaciares National Park, 13 of which are moving forward. Upsala Glacier is actually receding. This means the glacier loses more mass than it gains; sadly, the mass it loses was what blocked our route to see it – I witnessed the slow demise of a glacier.

After a half hour of bearing the arctic cold on the boat’s deck, we rushed inside the heated cabin to defrost as the catamaran headed towards the Spegazzini Canal to view the Spegazzini Glacier.

The Spegazzini Glacier is also receding and is considered the tallest of the bunch that form within the park. 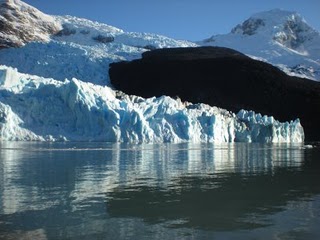 There were barely any icebergs in the water near Spegazzini Glacier and this allowed us to really see the color of the lake. It’s a beautiful light green and it turns out that the lake gets this color due to the ice deposits from the glaciers.

Here’s another tid-bit of information: ever notice the amazing deep blue color some galciers or icebergs may have? (The picture below is an iceberg off the Upsala Glacier and is a great example.) The blue color is an optical illusion caused by the lack of oxygen in the compressed snow. 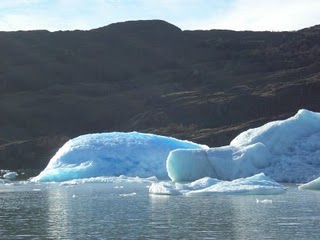 It was while we were awing at the Spegazzini Glacier that we heard thunder, but there wasn’t a cloud in the sky. While the thunder was still rumbling, we heard a splash and there, right in front of us, a piece of the glacier broke off and fell into the water. Truly, a stunning sight. The piece that fell off could have easily been half the size of the boat and the sound it created while breaking off and falling was echoed throughout the glacier wall and the mountains.

The grand finale of the day was a visit to the north side of Perito Moreno.

Perito Morneo’s size is compared to the size of Buenos Aires and although it’s not as big as Upsala Glacier or as tall as Spegazzini, Perito Moreno is famous because it’s one of the few glaciers that is still moving forward. 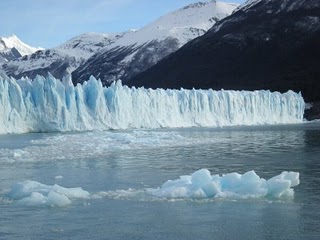 Seeing the glaciers from the lake was incredible!