In 1993, the Victoria Zoo became the Limbe Wildlife Centre through the partnership of the Pandrillus Foundation and the Cameroonian Ministry of Forestry and Wildlife. The LWC is a wildlife rehabilitation and conservation education center. The animals there were orphaned as a result of human-wildlife conflicts such as bushmeat hunting or the pet trade. These are major issues in Cameroon and throughout Africa. Animals are often killed both legally and illegally for meat in unsustainable ways, and the infants are kept as pets in unfit living conditions for wild species. When they are rescued by authorities and brought the LWC, the animals are treated by their veterinary team and the rehabilitation process starts as they are integrated into conspecific groups and monitored by their team of specialists. Their mission is based not only on rehabilitation and release, but on educating the population to change views and opinions on wildlife and conservation so that these animals will be safe in the wild for as long as possible.

To accomplish this mission, the LWC is open to the public for visits. Most of the visitors to the Centre are locals bringing their families to see the animals, but occasionally international tourists such as myself pop in, and there is so much for us to be impressed by.

Upon entering the sanctuary, every person greets you with warm hellos, hugs, handshakes, and smiles. Once paying at the entrance, viewers can begin walking the tourist trail and viewing animals. The first visible animals are 3 family groups of gorillas and their impressively giant silverback males. They were the show stealer in my ape-loving heart, but there were so many other amazing animals as well.

Past the gorillas are two huge groups of chimpanzees (totaling 44 individuals). They are the liveliness of the LWC, shrieking, chasing, playing, and grooming. Just sitting in their presence could keep someone engaged for hours. There were many groups of guenons and mangabeys throughout the sanctuary, mostly plotting on how to steal small items such as food or toys from onlookers.

Another amazing group of animals are the “Papio” group, meaning the baboons, mandrills, and drills. The members of this section became known to me as the most underrated primates. All three species are beautiful in coloring and huge in size (for monkeys). Not to mention they live in large multi-male and multi-female groups with very interesting social dynamics and rules that control everything from eating to grooming to space use.

Additionally, at the Centre there are non-primate animals native to Cameroon such as a Nile crocodile (Crocodylus niloticus), two dwarf crocodiles (Osteolaemus tetraspis), a python (Python sebae), a bay duiker (Cephalophus dorsalis), a blue duiker (Philantomba monticola), a bushbuck (Tragelaphus scriptus) and an African civet (Civettictis civetta). These animals are often seen as the stars of the show, especially the crocodiles being so ancient and amazing.

Before leaving, one has the opportunity to check out the educational building to learn about the various species and the Centre’s history. There is also a great little gift shop with plenty of handmade items to help support the Centre. For lunch, there is a delicious restaurant within the Centre called Arne’s cafe. There you can get the most delicious veggie burger on the planet. It is definitely worth having a meal there.

The LWC does a lot more than just house animals, a huge amount of their work is in educating the public through visits, school programs, and community outreach. They are leading the fight in Cameroon for conservation and animal welfare, and are worth the time to visit, volunteer, or spread the message. If you are interested in helping with conservation there, the LWC accepts donations as well as volunteers. Give some resources or time to help these animals that can’t speak for themselves! 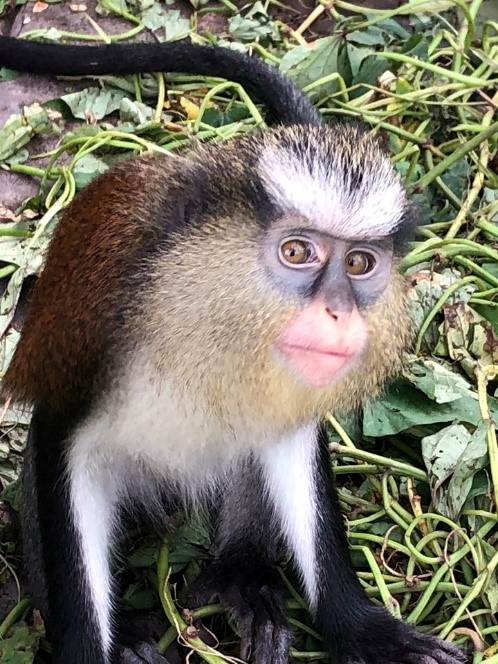 For three weeks during the month of August 2019, I got the incredible opportunity...